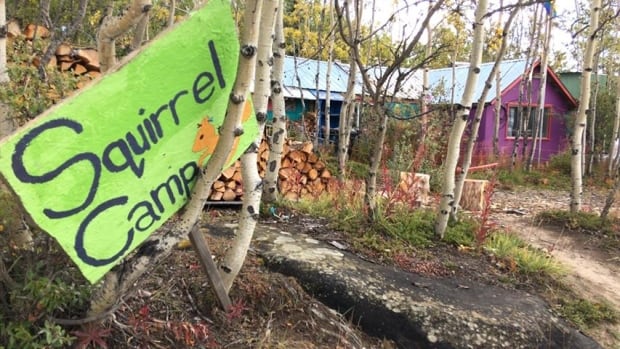 ‘Squirrel camp’, also known as the Kluane Red Squirrel Project, has been hosting researchers for more than 30 years. It’s a partnership between five universities. (Cheryl Kawaja/CBC)

Andrea Wishart tells people she chases squirrels for a living.

She’s only half-joking — the University of Saskatchewan Ph.D. student has spent months tracking and observing the little rodents at “squirrel camp,” also known as the Kluane Red Squirrel Project. It’s a small but renowned research camp at the foot of the Saint Elias mountains, alongside the Alaska Highway in Yukon. 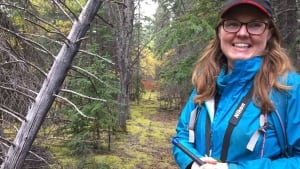 ‘I’m fascinated with how animals interact with their environments and manage their own resources,’ says Andrea Wishart, a PhD student now at squirrel camp. (Cheryl Kawaja/CBC)

“Obviously, there’s much more to what I do than just running around the forest looking at little tree rodents,” Wishart said. “But I’m fascinated with how animals interact with their environments and manage their own resources.”

The Kluane Red Squirrel Project — launched 31 years ago — is a partnership between five universities: McGill, Saskatchewan, Alberta, Guelph and Michigan. It allows students and researchers to live on site and study the little animals in their natural habitat.

The camp’s doormat reads — what else? — “Welcome to the nuthouse.”

Data collected at the camp over the years has shed light on everything from squirrels’ “personality” and social behaviour to their sex lives.

“We know everyone who’s lived here; we know who’s related to who, how often they’ve bred, who they’ve given birth to, who they mated with — all of that information,” said Zach Fogel, a senior technician at the camp. 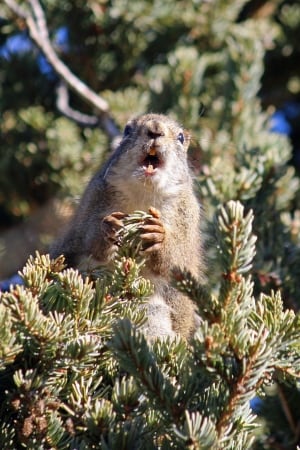 Data collected at the research camp over the years has shed light on red squirrel habits and behaviour. (Andrea Wishart)

Wishart’s research focus is on the squirrel’s caching behaviour — how they stockpile food. She’s even collared some animals with “squirrel Fitbits” to help track their movement.

“They basically have little addresses in the forest that you can predictably find the same animal at, and they will stay at that territory for almost their whole life,” she said.

Wishart says the historic data, collected over decades, is invaluable.

“I think we’re up to over 400 people that have been ‘squirrellers’, or technicians, on the project. It’s a lot of people — tons and tons of researchers,” she said.

“There’s been influences in all kinds of different fields of research at this point, using squirrels as a model system. And some of the questions have been very squirrel-specific — ‘why do squirrels specifically do what they do?’ — but the broader context of it is understanding how animals work in a wild environment.”

Rodent research is not for everyone — even if the rodents are cute and bushy-tailed — but for the biologists at squirrel camp, life doesn’t get much better.

“I really love it,” Fogel said. “You know, there’s — in my opinion — something to be said for being outside all the time and just kind of a little bit dirty all the time. You know, my hands constantly have rubbed-in dirt, and we can’t obviously shower that often.” 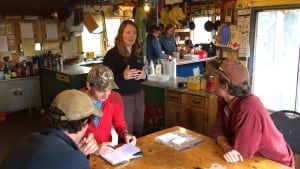 ‘There’s a really cool community atmosphere, you know. We have family dinner every night where no matter how busy people are with work,’ says research technician Zach Fogel. (Cheryl Kawaja/CBC)

But what makes the camp most special, he says, is the comraderie among scientists.

“In general, everyone helps each other out a lot. There’s a really cool community atmosphere, you know, we have family dinner every night where no matter how busy people are with work,” Fogel said.

Unlike the squirrels, Chernicky is not in her natural habitat. It’s her first time in the boreal forest.

“It was a long way for me to come. I actually drove up from Florida to Saskatoon, and then took a flight from Saskatoon to Whitehorse,” Chernicky said.

“The interactions that I have with the other scientists here, the amount of knowledge and theories that are bounced off of each other — it’s absolutely incredible.” 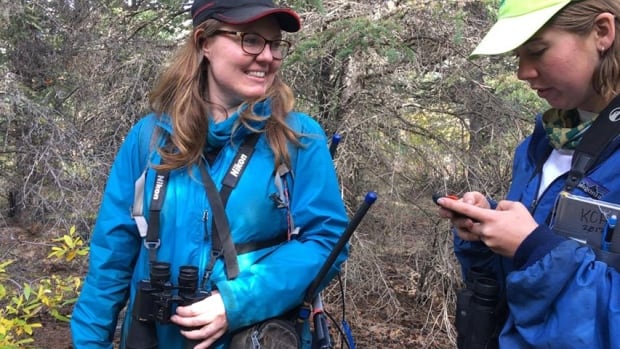 Wishart in the field with Kiley Chernicky, who came from Florida to work at squirrel camp. (Cheryl Kawaja/CBC)